Goldsboro-Wayne County is nestled in the heart of eastern North Carolina—we are the halfway point between our state capital and the coast. We’re situated in the geographic region referred to as the Coast Plains, but our story is anything but plain! Our history dates back to the American Revolutionary War, and there are two major factors to explain why Goldsboro became a hotbed for historical drama and development in eastern NC and the Atlantic seaboard: our geographic location and transportation activity. Although today we’re known for our jet noise, it was locomotives that first gave Goldsboro its notoriety. In fact, Goldsboro was the main junction for the world’s longest railroad at one point. Pretty neat, huh? But here’s the real kicker. Until trains came along in the mid-1800s, Goldsboro didn’t exist. That’s because Goldsboro-Wayne County was originally called Waynesborough-Dobbs County. So, what happened? 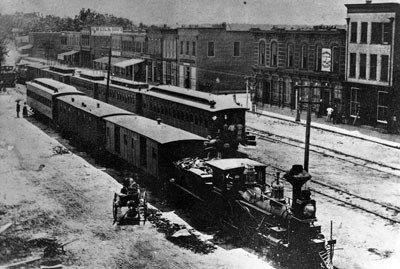 This brings us back to the significance of our geographic location. The Neuse River runs from the Raleigh-Durham territory through Goldsboro and all the way to the Atlantic Ocean. In the late 1700’s a town built up called Waynesborough situated on the bank of the Neuse River. Riverboats brought passengers and freight into town, and quickly, a courthouse, stocks, jail, taverns, stores, schools, and homes were constructed. It was the main mode of transportation for freight and passengers travelling to Raleigh, New Bern, Fayetteville, and Tarboro. Towards the American Revolutionary War, the western portion of Dobbs County broke away and was renamed in 1779 as Wayne County after the popular American General “Mad Anthony” Wayne.

The dawn of the railroad era in the first half of the 1800s brought major changes to transportation and Wayne County. The Wilmington-Weldon Railroad (originally called the Wilmington-Raleigh Railroad) was completed in 1839, and shortly after, two other major railroads were completed using Goldsborough Junction, the name at the time, as a train hub connecting major railways going east, west, north, and south. By 1847, all the hotels, homes, businesses moved away from Waynesborough to Goldsboro making it the new county seat and the junction of the longest railway in the world at the time. Goldsborough Junction named after Major Matthew T. Goldsborough, a popular Assistant Chief Engineer who helped complete the Wilmingtown-Weldon Railroad. The town of Goldsborough was incorporated in 1847, and the name officially changed to Goldsboro in 1869.

Only a few years after the town was incorporated, steamships ceased operations by the river. Sherman’s Union Army marched through Wayne County in March of 1865 destroying any of the last remnants of the Waynesborough town. Today, you can still get a glimpse of Waynesborough by visiting Old Waynesborough Park. The park is only 3 miles from downtown Goldsboro and consists of antebellum period structures, 4 miles of hiking trails, campgrounds, and serves as a venue for private and public events. It is also a main stop along the Mountains-to-Sea Trail.

Yeah, side note, did you know that General Sherman marched through Wayne County? As part of his Carolina Campaign, his army staked out in Fayetteville for several days before devising a plan to head to our state capital of Raleigh. To do that, Sherman knew controlling the towns along the important Wilmington-Weldon Railroad would be important, so he broke up his army into right and left wings to take over Goldsboro and Smithfield. From here, he marched up to Raleigh before setting his eyes on the Confederate capital of Richmond, Virginia!

On this same note of Sherman’s presence in Goldsboro, well a big discovery came out last year. Local researchers and historians by the name of Amy and Jay Bauer discovered and proved the existence of the lost U.S. Colored Troop, known as the 135th. The 135th U.S. Colored Troop was organized in Goldsboro and marched with Sherman back to D.C. in 1865 towards the tail end of the Civil War. Historians across the country kept telling Amy and Jay that they were wrong, and how no colored troops marched in the parade in D.C. at the end of his raid through the south. However, after years of checking penchant records, visiting grave sites across the southeast, enough historical documentation surfaced along with the accounts of living descendants that this troop which organized and formed in Goldsboro had been forgotten about in the historical preservation of the Civil War story. Pretty great discovery originating from right here. The troop consisted of about 1200 men, of which, about 200 are confirmed to have roots in NC and Wayne County. Descendants have been tracked down and in April of 2018, descendants gathered for the first time to recognize their families’ part in the Civil War. Currently, the research team is working on having a dedicated site for this lost troop.

A few years before Sherman’s March through Goldsboro in 1865, Goldsboro was the site of the famous last battle of Foster’s Raid held in late 1862. Today, you can visit the Goldsboro Bridge Battlefield site for guided and self-guided tours of this battle that took place three miles south of downtown Goldsboro. The Wilmington-Weldon Railroad’s tracks used a bridge to cross over the Neuse River to get to its main junction in downtown Goldsboro. The Union Army believed that if this bridge could be destroyed, especially at around the same time the Union was on its way to a major victory in Virginia, then the confederate armies in the Carolinas would be desperately hurting for resupply of food, soldiers, and medicine.  Foster was successful in temporarily destroying the tracks and the supply chain, but the victory was overall mute, as the Confederates overcame the Union Army’s attacks in Virginia.

In 1909, Goldsboro Union Station (GUS) was built and still stands today in downtown Goldsboro. The station serviced the last trips of the Wilmington-Weldon, Atlantic Coast Line, and Southern Railroads. However, with the changes in technology and innovation of the Baby Boomer generation, the last passenger train left Goldsboro Union Station in 1968. This building is now on the National Register of Historic Places, and our Downtown Development office is working diligently to put this building back into use. There are also talks within NCDOT to reintroduce passenger/commuter rail between Raleigh and Wilmington, and GUS would be back to its intended use! Until that rail service comes back, our city is working on a feasibility study to reveal what would be great uses of the historic building in the meantime.

As vibrant as Downtown is today, it’s not always looked like this. The last passenger train to leave Union Station in the late 1960s was a poignant moment for our city. As the last passenger left, so did much of the small businesses and foot traffic. Like much of the modern world, the dawn of shopping malls, big box stores, and franchises moved the hustle and bustle out of the downtown district. Our downtown suffered from blight of abandoned buildings and inefficient traffic flow due to the scars of train tracks that had long been gone. Downtown got a bad rap from the 1970s through the first decade of the 21st century. Fortunately, in the early 2000’s, the City of Goldsboro was awarded a grant through the United State Dept. of Transportation in the amount of $15 million. This was a highly competitive grant, as only 3% of applicants are awarded. Our city matched part of the capital investment and by the end of 2015, our downtown Center Street was completely transformed. Since that project wrapped up, over 75 new businesses have opened up, over 100,000 sq. ft. of space has been renovated and put back into use, 90% increase in job creation, and almost $21 million of public and private money has been invested in downtown Goldsboro over the last 10 years.

Although we don’t have passenger rail today, our most obvious mode of transportation has taken to the skies thanks to the F-15E’s and KC-135 (soon to be KC-46s) based at Seymour Johnson AFB. Named after a US Navy Aviator from Goldsboro, this base predates the US Air Force itself. Getting its start in 1940 during the height of WWII, it was originally purposed to be a training air field for our nation’s defense. Even today, it remains the only air force base named after a naval officer. Seymour Johnson AFB also serves as the venue for North Carolina’s largest free air show, Wings Over Wayne Air Show, that takes place every other year in odd-numbered years.

Our history doesn’t stop here, but for the sake of you time, here’s a brief summary of some other “did you know” stories about us that make us unique in our state and national history.

In 1961, two hydrogen bombs were dropped accidentally 12 miles north of Goldsboro, after a B-52 aircraft broke up in midair. One bomb was recovered. Although much of the second bomb was also recovered, a missing piece was believed to have sunk deep into the swampy earth and could not be recovered. The piece remains in land that the Air Force eventually purchased in order to prevent any land use or digging. The bomb, although believed to be inactive, has never been unearthed to this day.

Did you know that Goldsboro is on two very important trails in our state? We are on the Mountains to Sea Trail and the African American Music Trail. Center Street is a dedicated land route along the MST that goes from Clingmans Dome in the western side of the state all the way to Jockey’s Ridge in the Outer Banks. Although the main route that takes you through Wayne County is to paddle the Neuse River, you’ll see MST markers up and down Center Street that connects 3 miles east towards Stoney Creek Park. Another great trail designed by the NC Arts Council is the African American Music Trail, which Goldsboro is proud to be a part of. You can visit our trail by going to the AAMT Mural on the corner of Center and Walnut Street in our downtown, or you can attend one of the various musical events at the Arts Council of Wayne County that pay tribute to our legends on the trail.

PUBLIC ART has been a huge part of downtown Goldsboro’s transformation. As you walk the historic streets, you can’t help but notice an array of art that’s part of our physical and cultural landscape. But, don’t get too attached to the main pieces in our roundabouts. Each fall, these main pieces (except for the fountain) rotate out. The art is leased from artists, and each summer, a public steering art committee made up of different members from Wayne County work to narrow down the selection for the public to vote on. The most popular pieces are then installed in October each year at a grand ceremony.

Below are some answers to Frequently Asked Questions relating to all things Goldsboro. Hopefully these will help you plan your trip, and if there’s anything else we can answer for you don’t hesitate to reach out!