Your virtual tour of the finest BBQ in Goldsboro-Wayne County!

Here in Goldsboro-Wayne County, we love our BBQ like no other. And with good reason, since we have some of the best BBQ in the state right here on our doorstep. Even though everyone’s travel plans are on hold for now, that doesn’t mean we can’t share our legendary, deliciously more-ish BBQ with you virtually – so when we’re all able to travel again, you know exactly where to go and what to taste first. So, join us on a taste-bud tantalizing, appetite inducing, virtual tour of Goldsboro-Wayne County’s finest BBQ!

The one-and-only, Grady’s BBQ. Running for more than 30 years, this un-assuming BBQ joint turns out some of the best BBQ ever known. Mr and Mrs Grady work day and night, literally, to bring us an array of classic staple Eastern NC BBQ dishes, with the friendliest service around. Here’s an insider tip: On Saturday only, they serve BBQ turkey, which always sells out fast. It’s absolutely delicious, so make sure you get there early!

Adam’s made a name for itself with the Roadside joint, and now, they’ve fulfilled our dreams by opening a restaurant Downtown. It showcases the same exciting, adventurous take on BBQ as the roadside joint, but with some delicious new menu items, and an awesome restaurant/bar ambience. The Totchos are just one example, and of course, you can’t leave an Adam’s BBQ joint without having your fill of the mouth-watering brisket and mac n cheese.

We’re getting you ahead of the crowds here, as Wilber’s isn’t officially re-opening until late Spring, but we can promise you that once it does, you’ll want to head there immediately. They’re bringing back all the most loved menu items, so you can enjoy some of the most famous BBQ in North Carolina, while jets soar overhead. We can pretty much taste the excitement!

We suggest making some room in your stomach before venturing into McCall’s, because once you’re inside, there’s no holding back. Take your time in the comfortable dining room, eating your way through the enormous buffet, which always includes a range of BBQ meats, sides, and last but not least, McCall’s legendary dessert selection – most notably the banana pudding, which gets rave reviews. 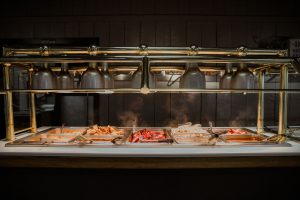 This BBQ hotspot is a well-kept local secret – if you ever want to know where the locals are eating, look no further than Stonewall’s Restaurant and Grill at lunchtime. Here’s an insider tip too – make sure to go on a Wednesday lunchtime, because on Wednesday’s only they serve the most insanely good fried chicken.

Why not swing past Adam’s Roadside BBQ as a final stop, just to check you haven’t missed anything on his menu?! It’s only being thorough! If you haven’t already, try their Brisket meatloaf – you definitely won’t go hungry then!

So there you have it, a whistle stop tour of the best BBQ restaurants Goldsboro-Wayne County has to offer. But it doesn’t stop there. We love our BBQ so much that we are home to the largest pork retailer in America, Nahunta Pork Center. Stop by and pick up some delicious fresh pork for dinner.

No BBQ tour of Goldsboro-Wayne County is complete without a trip to Heritage Farm General Store. The beautifully restored building is an absolute treasure chest, stuffed with a huge selection of Cheshire Pork goods, which they produce, plus any BBQ and cooks’ aids you could want. And, on sunny days, you won’t be able to resist their milkshakes, made from freshly hand-spun Simply Natural Ice Cream.